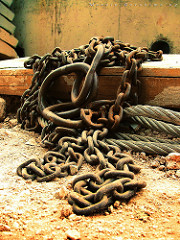 I seldom shy away from sincere truthful accounts of humanity’s pain. If someone has lived the pain of abuse or enslavement, then surely, I can have the courage to be their witness with God in my heart.

Slavery is more rampant on the planet than it has ever been. It’s not just in the past, or only somewhere on the other side of the world. Sadly, it’s in everyone’s cities and neighbourhoods. Right now. And it extends beyond Earth.

This is an epidemic. Consider the staggering statistics no matter which source you read. The U.S. International Labour Organization estimates that there are 40.3 million victims of human trafficking around the globe, earning criminals $150 billion. 25% of them are children, often used for cheap labour or no wages or sold for commercialized sex. The average age of a child that is groomed into trafficking is 13-14 years old. Every 40 seconds, a child goes missing in the U.S.  8 million worldwide go missing each year, 50,500 in Canada. But we can’t just blame innocence for this. Anybody can get caught in deception. Men and women also lose their freedom through fraud, coercion, debt bondage, or force. 81% of human trafficking victims are trapped in forced labour, and 75% of them are women and children. These are the estimates, knowing that those who suffer often cannot report their mistreatment or find a way out, and children in poorer countries are often not tracked. Non-humans also barter for humans! 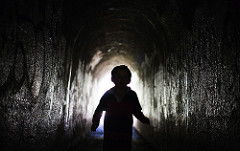 ‘The Future of His World’ flickrcc.net

How does someone get ensnared in such a horrific situation? It’s not that hard to understand when you consider that Earth and every single human has been enslaved through the negative alien hidden agenda. Let’s consider how the trap evolves. If you don’t know that you are a Soul-Spirit, you don’t know eternal, unconditional love. You think that you are just a body that one day expires. It’s supposed to. So that means you are also disconnected from the true intelligence of your body and your Creator capacity as a multi-dimensional energetic being. You don’t know that this is your inherent power and birthright. You don’t know that you can heal. So you believe your shame and the mind control programming that you inherit. You take on this shame as though this is who you are. You’re now operating from victim consciousness, and you feel powerless to change it in meaningful ways. You may sense there is more to life and want more for yourself, so you keep looking for a way forward. But since your heart has forgotten that you are the source of the love that you have been seeking, and your inner compass, you start looking outside of yourself for the answers – in all the wrong places. You look for approval from anyone who makes you believe that you are special. Maybe your pain is so great that you numb it with addictions. Maybe, because you’ve been abused, you devalue yourself and resign yourself to believing that this is ‘normal’ behaviour, and it will never be any different for you. Or perhaps you’re hopeful that you’ll be rescued and live on riches. Maybe you just want better for your children so you are willing to sacrifice everything and you put your future in someone else’s hands.

Do you recognize yourself in any one part of this story, at any time in your life? This is why our healing matters.

Here’s a more thorough, but not by any means complete, list of the intentions of the negative alien agenda that feed human trafficking:

Human trafficking is an all-encompassing expression of the anti-life agenda and our collective pain! This is why all my services are intended to help us release these distortions, and return to inner, sacred, balance and peace with our God Within.

The biggest travesty is that our enslavement is so prevalent because these strategies have humans enslaving themselves. Turning a blind eye is part of the problem. Holographic mind slides can control the mind so that people will not, and cannot, recognize enslavement when it’s right in front of them. Speak of any topics that threaten the negative controller’s agenda, and the mind-controlled person will ignore, dismiss or ridicule the issue. A good example is the entrapment that occurred at the NXIVM organization, an upstate New York so-called ‘self-improvement’ organization. When women were blackmailed, asked to agree to be a slave to a master, and participate in a branding ritual, they did. One woman said it didn’t occur to her that she could leave. It’s startling to hear this if you are aware. But when the mind is controlled, truth and choice is not apparent. ** 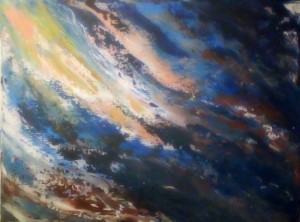 ‘Ray of Hope’ by Amâeil

Is this situation hopeless? Any child, sex worker, or forced labourer knows what doesn’t feel right. Nobody wants to be duped and nobody sets out to be used and abused. Humans inherently know there is something wrong with this global dis-ease. We were not created this way. This is where there is opportunity for healing. We can’t underestimate the resilience of the human Spirit.  (TEDx Talks offers many presentations by survivors and advocates on YouTube.)

We’ve all inherited pain and the victim program. We either heal it or pass it along. Sadly, some will never allow themselves to feel or heal their pain, and project it all onto others in the most heinous ways. These are the victimizers, the parasites, and the predators. The NAA are counting on them. But love is more powerful. Re-educating ourselves on the natural laws and our Krystic values, and re-connecting to our hearts makes it possible to awaken the love that is in our Divine human blueprint. We can reclaim our ability to hold neutral compassionate witness so that God may heal this through us.

How can we change this?

I witness these atrocities because I have felt the collective anguish, the deep wound to our Divine Mother Earth and to humanity. I cannot turn away and pretend ignorance. Nor can I hold back love. I AM this, even if I have to work to remember. I came here for this. We came here for this. I won’t say this will change overnight. We have a ways to go. However, while some people will not remember that they too are love, we can shine our Light where there is darkness and pain, and then another door opens to our collective dignity, rights and freedom.