The following case studies describe actual client sessions and the results achieved through the various techniques used in the healing process. The names have been changed and details intentionally omitted or altered to protect the confidentiality of clients. The results are unchanged.

You may also wish to read Healing the Targeted Children.

Lauren’s mother described her as having a heart of gold. She was loved by everyone and as an empathic child, she wasn’t afraid to stand up for others. Lauren though could also get very angry and would express that she felt like she was always the one who got in trouble. She had a keen awareness for injustice. 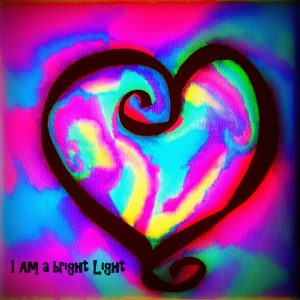 ‘I AM a bright light’ by Amâeil

All was well with her very close group of loving friends, until one day, without any apparent reason, her closest friend suddenly turned on her, striking out in hatred. Surprisingly, all the other friends that were present on this group chat forum, turned against her too. Only 2 stood by her. Later, Lauren would say that in that moment, her world of safety and support collapsed. She felt lost, angry and sad. However, she kept this all to herself for almost 2 months.

Lauren’s mother only noticed that she was crying more, yelled and resisted more, and seemed to always be on the edge. She was easily triggered. 2 weeks after the incident of feeling betrayed Lauren got upset at her brother but the reaction was extremely disproportionate and highly uncharacteristic. She screamed that she wanted to kill herself and grabbed a knife. She didn’t cut herself but felt like it.

Once Lauren’s mother found out everything that had transpired, she took great care to talk with Lauren and their open conversations slowly allowed Lauren to feel safer and supported again. She revealed to her mother that indeed, she felt like she wanted to just die. But the nightmares abated and she became happier with time.

Nonetheless, Lauren’s mother reached out to me to understand the situation and help her daughter be clear of the trauma impacts.

My higher guidance clarified that this was a direct negative force assault on this group to scatter the solidarity of these children. These children had all come together to support the Unity timeline, though in their histories together they had both positive and negative relationships. Alien forces had manipulated betrayal memories through a negative form to ensure they didn’t succeed. This was similar to a pattern of being crucified for upholding the truth. It was no surprise that Lauren has expressed that she had done nothing wrong so it was especially shocking that she was psychically attacked.

In the long distance healing session I was guided to clear entity manipulation, miasma, ancestral energies connecting into the planetary geographic of the Caribbean (3rd stargate), clear her emotional and mental body of old painful betrayal experiences that she was apt to project onto her interactions with family and friends, collapse the timelines that were no longer supportive, and reclaim her soul fragments. She also received some rebalancing of her central nervous system and cranial sacral system, and sound vibration to re-encrypt her higher heart. Lauren’s mother also received some custom tools to continue to support her, and some guidance on helping her to manage her anger.

In our follow up conversation Lauren’s mother was very happy to share that within 1-2 days after the session she felt like a “miracle” had happened: all of Lauren’s negative self-talk and self-blame disappeared, she was back to feeling safe, and laughing a lot! A weight had been lifted for the entire household: everyone was sleeping better, and the house felt peaceful again.

While most of the group disbanded, in holding witness through this multi-dimensional clearing, with the Guardian Alliance, we were able to override the negative outcome that was intended both for Lauren and the planet. She could now feel compassion for her closest friend who had betrayed her, and feel assured in connecting with new friends. The important learning for Lauren was that while she would experience bumps in life, she was supported, safe, and could transcend pain to be a shining Light again. This was a change in a long-standing painful pattern, though Lauren wasn’t consciously aware of it.

A bonus was that after following a suggested gentle metal cleanse, Lauren was again able to eat dairy after many years without feeling ill.

10 year-old Carson was doing fairly well in school though bored, but was mostly having a difficult time at home, often oppositional with his parents, and angry at his siblings. While he could be clear, intelligent and loving, his rage could quickly and disproportionately escalate, culminating is hateful statements, as well as speaking of suicide and acting it out. Of course, this was frightening to the parents and they considered medication prior to our healing work. In addition, he felt lots of physical pain in his stomach and legs, which was previously attributed to lyme disease, though after considerable detoxing through a naturopath the pain persisted long after and there no longer any evidence of lyme in his system.

Given the child’s age, I worked with the mother to gather detail about her concern for her child and his behaviour, and began a process of educating her on relevant energetic concepts and tools that could be applied to her son. The healing was facilitated through the AoA Hieros Gamos consciousness field, long distance, and then I followed-up with the mother to convey what had been brought to consciousness through my higher guidance.

The mother did feel that there was anger in the household that her son inherited as a modelled behaviour, and acknowledged that it was a very busy and chaotic household. She acknowledged that the healing work could also be of benefit to her.

The very first tool that was suggested to the mother, even before the healing session, was to repeatedly run the “Clearing Negative Energies” meditation. This is a foundational tool used to clear negative energies from the body and any environment, and is essential to regularly cleanse the lightbody of any entities, negative vibrations and a general myriad of negative influences.

The next essential tool the mother learned was the 12-dimensional Shielding Technique so that she could do this for herself and her child and protect him from negative forces. This field of protection was extended to protect the child’s room and the home so that he was protected during his sleep state. This is when children are most vulnerable to negative influences.

It’s important to understand that many children who are struggling like Carson, at various ages, are loving children of higher consciousness who have come to Earth on a mission to support humanity’s ascension. However, once incarnated into a body, they feel the collective pain, and density of the energies that do not feel resonant. When Carson was very upset he would say that he wanted to “go home”.

Further, children are unfortunately targeted through the negative alien agenda (NAA). Please do not let this truth about NAA frighten you or dissuade you from healing for your child. The healing support I offer is about helping your child to remember that they are energetic-Spirit beings, help them to learn to manage their own energies, and to calibrate and clear their bodies to be able to manage the Earth energies. While the mother was not familiar with the negative alien agenda, and nor was she well versed in energetic concepts, she was open to the information and it made sense to her. This is how the parents I work with commonly react to the information and it provides some relief to have this understanding of the “big picture” on Earth.

The session work revealed that subconsciously, Carson didn’t know how to cope with the choice to come to Earth. He felt he wasn’t pulling his weight to help humanity, and was actually angry and frustrated with himself, feeling powerless to change his feelings and the situation. This is energetically painful to a child’s heart.

He would be further triggered into anger if he was told what to do and felt that someone was asserting power over him rather than respecting his awareness. His anger was also a protective defense to not feel vulnerable.

What all children want is to feel like they contribute rather than being ignored or feeling that they are being a problem or misunderstood. So the first suggestion was to help him be okay with being a child and validate that he was doing his very best. If he felt angry, it was important to allow his emotion, listen to what he had to say, and be non-judgmentally curious with him to engage him with questions so that would have to explain his feelings and thoughts, reinforcing his power of choice. Further, if he did get angry, it was important to reinforce with him that all was not lost and that he didn’t have to give up on himself. Reinforcing that his emotions and fears were being taken seriously was important to establishing trust, and so that he could once again feel resonance with the unconditional love that was most familiar and comforting to his Spirit.

After the first healing session, the mother first reported that her son was in good spirits for the first time during the entire family vacation, and that he was much less explosive in his anger. While he still complained of physical pain and wanting to die, it was less frequent and more matter of fact when he made the statement, as though it was habit. After the second clearing session, she saw a lightness in her son and he was smiling at her much more. He could still have negative perspectives but not as often. While he still had some fear about going to bed but was calmer about it all.

The mother also felt that her growing awareness of her son prompted more understanding and compassion for him. Using the custom affirmation for herself and her family also had been highly supportive.

Beloved God, please protect these children from harm and further manipulation. May your 12th dimensional blessings bring them peace and grace in this life, that they may know who they truly are, in their hearts. May they live in their highest expression and fulfill their God purpose. Bless these families that love, unity and joy prevail over the difficulties. We thank you for bringing our awareness to their concerns and challenges and all whom they represent. May we all support all the children who have come to assist in our evolution. May we honour them with unconditional love and respect. In Divine right order and harmony, as their highest selves will allow, and as God would have it be. Thank you, thank you, thank you. It is so.